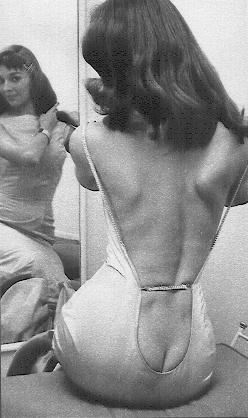 Vikki Dougan
Vikki Dougan's appearance in this newswire photo in 1957 was the inspiration for this hilarious song about her. Vikki reportedly said, "I'm not busty, so what's a girl to do?"

REFRAIN:
Vikki turn your back on me
Come on darlin' just for me
'Cause there is something so appealin',
that your eyes are not revealin'!
Oh, Miss Dougan, you're for me!

Other girls who approach me,
Are beautiful, gorgeous and gay!
But you're so gosh darn more inviting
Going the other way!

Vikki baby you move me,
In those far-out clothes!
But don't it get chilly flyin' home at night
When that cold cold tail-wind blows?

Vikki baby, you rock me,
Without you I'm bereft!
I'm hynotized by those crazy eyes,
And that callipygian cleft!

Vikki baby, we're older,
My get up and go is gone
But when I see you walking down the street
Them buns still turn me on!

The Origin of the Song

There is an interesting story about the origin of the song. Nancy Schimmel, daughter of that terrific 50s-60s folk-songwriter Malvina Reynolds, tells us that the lyrics of the refrain and the original (first three) verses were written by her mother, Malvina Reynolds, at Lou's request. Nancy adds this fascinating tidbit:

Lou wrote the music, and gave the song the funniest spoken introduction I've ever heard for any song. Lou introduced Vikki Dougan as his because it made a better introduction, and I think Mom appreciated that too. Lou added the last verse much later. Every once in a while Lou would ask Mom for lyrics, either for a hot subject, such as Vikki Dougan, or more often to fit an old tune he liked. She also wrote singable translations of some folksongs. As I remember, Lou and Mal copyrighted their collaborations under the pseudonym "Cal Grigsby. Continuing the family tradition, I wrote the words to "A Million a Day" and Lou wrote the music."