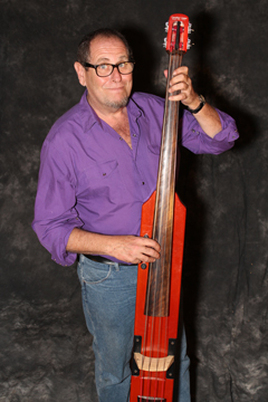 Bassist Andy Corwin is a performer and songwriter with an offbeat sense of humor and an outrageous repertoire of folk, country and bluegrass music. A native New Yorker, Andy relocated to Southern California in the late 1970′s to attend UCLA where he earned a Master of Fine Arts degree in playwriting.

A long-time folk & bluegrass enthusiast, he was a member of the politically incorrect  folk/comedy quartet The Foremen during the 1990′s and in 2005, his song writing was awarded top honors in  the Kerrville Folk Festival’s  “New Folk” Song Writing Competition.

Andy is also an accomplished film and TV documentary director, writer and editor whose work has appeared on NBC, The Discovery Channel, The History Channel,  A & E and The Food Network.