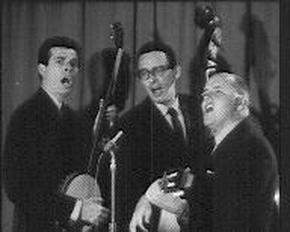 The Limeliters are a folk group formed in July, 1959 by Louis Gottlieb (bass), Alex Hassilev (baritone), and Glenn Yarbrough (tenor). They played in concerts and at folk houses like San Francisco's Hungry I and Hollywood's Ash Grove during the height of the folk music boom of the early 60's, and the group is still performing today, with new members.

See our List of All Limeliters from 1959 - Present with bios for each.

As Lee Zhito of Billboard says, The Limeliters concerts are always "presented in an atmosphere of laughs created by sharp ad libs, gag introductions, and a humorous treatment of the song themselves."

The group cannot honestly be said to have any one single big hit; rather they are loved for a large collection of rousing songs including such audience-pleasers as "There's a Meetin' Here Tonight," "City of New Orleans," "A Dollar Down," "Have Some Madeira M'Dear," "Lonesome Traveler," "Wabash Cannonball," "Whiskey in the Jar," and many others which are performed on their 25+ record albums and in their exciting concerts.

The Limeliters' album, Tonight in Person reached number 5 in the U.S. charts in 1961. Their second album made the top 40, and their third release, The Slightly Fabulous Limeliters, made the top ten in the same year. But there one album with the longest staying power is undoubtedly their album of folk songs for kids of all ages, Through Children's Eyes.

What The Limeliters are truly famous for is their trademark "Limeliters sound." As Ron Byers says, "On stage they become a crowd, and one catches oneself looking behind curtains and at exit doors, wondering where the other voices are coming from."

It all began in 1959. It was springtime in Los Angeles, and "Cosmo Alley" was the nightclub to frequent. Lou Gottlieb, fresh from obtaining his Ph.D in musicology (and who was then working as an arranger for The Kingston Trio), just happened to be in the audience when Alex Hassilev and Glenn Yarbrough appeared on stage to sing a duet together. It was a chance meeting... and a legendary one.

Lou originally thought that "these two guys" could help him make some demos for The Kingston Trio. However, when the three started working together, they could not restrain the magic.

Soon, they packed up and headed to Aspen, Colorado, to work at a club called "The Limelite." Glenn and Alex had purchased it the year before, after singing there during the previous ski season. They set off for the "Hungry i" in San Francisco, which at the time, was the West Coast nerve center for the mushrooming contemporary folk movement.

When they arrived at the Hungry i in San Francisco, the owner said that he had just had "Lambert, Hendrix, and Ross" there and wasn't about to put "Yarbrough, Hassilev, and Gottlieb" up on the marquee!! But the group hadn't really decided on a name yet. So where had they last been playing? When they answered "the Limelite" he said "that's your name."
Their success was immediate and they launched their career with a bang. "It was amazing," Lou once recalled. "We opened on a Wednesday, July 19, 1959, and by Friday, we had offers from three different record companies." In early 1960, they released their first album on Electra. A string of best-selling LP's for RCA Records followed, as well as frequent appearances on every major TV show, making The Limeliters a household name.

For three years, The Limeliters were the musical representatives for Coca-Cola. Their rendition of the jingle, "Things Go Better with Coke" became a national hit. Time magazine summed up their appeal with the memorable quote: "If the button-down, scrubbed-looking Kingston Trio are the undergraduates of big-time U.S. folk-singing, The Limeliters are the faculty." You can now hear some of the best of that era on The Limeliters 36 All Time Greatest Hits.

Glenn Yarbrough left the group in 1963. For awhile, Ernie Sheldon filled in for Yarbrough, and the trio did a nice job on the mid-sixties albums More of Everything , Leave it to the Limeliters, and Limeliters Look at Love in Depth. Ernie Sheldon wrote the lyrics for what became Yarbrough's biggest solo hit, "Baby the Rain Must Fall."

In 1965, at the pinnacle of their success, the individualistic members of the group decided to call a halt to their career. They did so to reexamine goals they were forced to put aside -- because of their instant celebrity. For the next ten years, they pursued separate interests. Glenn Yarbrough is still well-known for his big hit single 1965, "Baby the Rain Must Fall." Alex took up record producing, and Lou -- well, he played "executive hippie" at Morningstar Ranch and played in some movies!

During the seventies, in response to an ever-greater demand from their many fans, The Limeliters embarked on a series of yearly reunion tours with Glenn Yarbrough. These were so successful that, in 1981, Lou and Alex decided to get back into the mainstream of entertainment. It was then they introduced an outstanding new tenor, Red Grammer , and a fabulous come-back began.

Some of the great albums from these years included Alive! In Concert, Harmony, Singing for the Fun, and A Mighty Day.

During this time, instrumentalist John David began performing with the group as, a master of many fretted instruments.

After eight very productive years, during which The Limeliters started their own record company, West Knoll Records, Red Grammer left the group to pursue a solo career as a children's artist.

Lou and Alex were then fortunate enough to find the soaring, high tenor of Rick Dougherty to replace Red. As a result, an extra shot of adrenaline was added to The Limeliters. Besides possessing a beautiful voice, Rick is a seasoned entertainer. He plays the banjo, guitar, bass and piano superbly; he is also a songwriter and arranger, and possesses a flair for comedy which fits in perfectly with that facet of The Limeliters' appeal. Rick can be heard on the title cut of A Mighty Day, and on the album, Global Carnival.

For Rick, meeting The Limeliters was an encounter with his heroes, and singing with them is still one of his greatest thrills because, "there is a power and enthusiasm in their music that you don't find anymore."

"What's happened to the unit since Rick joined is really encouraging, musically and theatrically," Alex commented soon after their debut together. "The act is attaining a new emotional dimension."

The transformation of The Limeliters is ongoing. In 1996, Bill Zorn joined the group, following the sudden, unfortunate passing of Lou Gottlieb. Their concerts have been greatly successful all around the country.

You can hear the trademark sound of The Limeliters, perhaps better than it has ever been heard before, in their 1999 album, "Until We Get it Right."

Lee Zhito clarifies why The Limeliters are so terrific: "In The Limeliters hands, the folk ballad is no longer a museum piece. It has been removed from the musty surroundings of scholarly folklorists. This is a music born from the lusty feelings of happy people and rightfully is performed in a fun-filled setting."

Several members of The Limeliters have also been in motion pictures, including Lou Gottlieb in Peter Sellers'1968 movie, "I Love You Alice B. Toklas," and in "Blume in Love" with George Segal in 1973 The Limeliters also performed the song "Love in the Country" on the movie soundtrack for the John Wayne movie, McLintock! (1963).

San Francisco music critic John Wasserman said the Limeliters "attained a stature equalled perhaps only by the Kingston Trio and the Weavers." As the enthusiastic responses indicated on their concert recordings indicate, they were and are resoundingly popular!

Now, as The Limeliters sail through the nineties, the 2000's and beyond, their unique blend of thrilling harmony, whacked-out humor and contemporary satire consistently draws standing ovations from audiences that, today, span three generations. With their energy and enthusiasm undiminished, The Limeliters remain the most exciting folk act that the genre has produced.

For more on each member of the group, go to Who Are the Limeliters